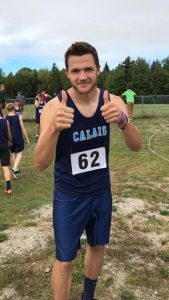 Addison Coty was born on December 23, 1999. As a child, he had a love and talent for sports and playing in the outdoors. Addison attended Calais High School where he embarked on an outstanding athletic career. He played soccer, basketball, baseball, ran track and field, and ran cross country. In his senior year he finished 5th place in Class C cross country runners. Addison wasn’t solely dedicated to athletics however. He maintained good grades, was a member of student council, and served as president of JMG.

Outside of school, Addison enjoyed hanging out with his friends. He was an employee of Mardens in Calais. He enjoyed playing sports non competitively, as well as hunting and fishing in his free time. Addison was beloved in his school and community. He had a very outgoing and friendly personality and always had a smile on his face. He loved being with his family, spending lots of time with his younger brother Wyatt.

Addison graduated from Calais High School in June 2018. He enrolled at Eastern Maine Community College and planed to follow his long time interest of becoming a welder. However, in July of 2018, Addison was involved in an automobile accident in Robbinston that tragically claimed his life. His death was a shock for everybody, something nobody expected or wanted to expect.

After his passing, Calais and nearby communities came together to mourn his death. Addison’s passing had a major effect on the community. Everybody remembered the many, many good times had with Addison, and his personality that had an impact on everybody around him. Addison may have passed away, but his spirit and personality will forever be part of the Calais community.